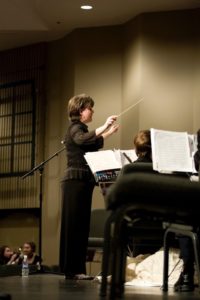 Robin Stangland recognized the need for homeschoolers to be involved in a band program in 1993, and she started the first homeschool band in the Lynnwood area with 10 students. Over the past 23 years the band has grown exponentially and became a part of the Homeschool Connections Co-op, providing instruction to hundreds of homeschoolers who have learned to play band instruments and made music a part of their lives.

What started with one beginning band class has blossomed into Beginning, Intermediate, and Advanced level concert band classes. These bands have consistently received superior scores at festivals in the Seattle area.

Jazz classes were added and now we offer Intermediate and Advanced level big bands as well as a jazz combo. In 2006, Kevin Hall joined the band program to teach our advanced jazz class. The jazz bands perform annually at Crossroads Mall, and also host a swing dance every spring. 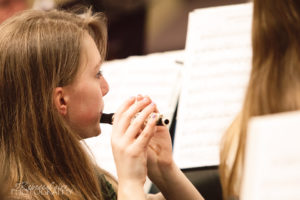 Some of our students have gone on to participate in their local high school music programs, and in All State and All Northwest groups. Several students have continued pursuing music at colleges across the United States, including Arizona State, Indiana University, Central Washington University and Northwestern to name a few. Many former band members are still participating in music through music ministry, community bands, theater, as freelance musicians, and as music teachers.

Research shows that students who play an instrument experience increased social and academic success, and it’s a lot of fun, too. Come join us!